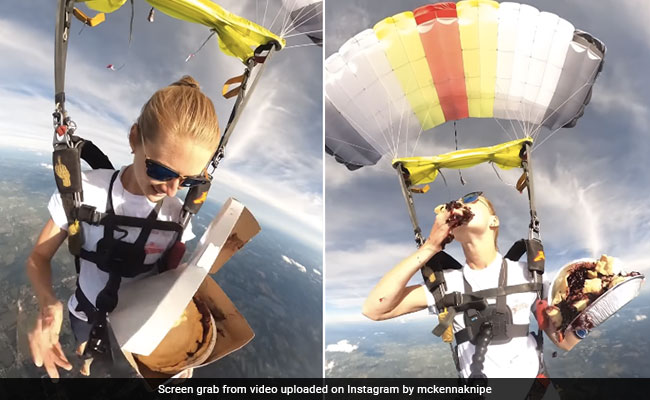 A video showing a woman eating a pie while skydiving is going viral on Instagram. It has been posted on the Instagram handle of McKenna Knipe, an influencer. The clip shows Ms Knipe opening a box while she is high in the air and relishing the pie. The video has amassed more than 20 million views and nearly seven lakh likes. According to the caption of the post, Ms Knipe shot the video to promote a cafe in Michigan, in the United States.

“Wise words. Support your local businesses!!! Napoleon Cafe here in Jackson Michigan is famous for their pies…. I Had to see why, the best way I know how! absolutely BOMB ! Freshly made every day!!” Ms Knipe said in the caption of the post.

In the video, she is seen opening a large box of pie that she sourced from Napoleon Cafe. Ms Knipe is seen thoroughly enjoying the food while hanging thousands of feet up in the air.

While the eating becomes a little messy, Ms Knipe doesn’t seem to be minding that at all. She is also seen waving at a passenger plane passing by.

Instagram users were thrilled after watching the video, and joined the conversation.

“Me wondering where’s the pie falling from!!?” commented one user. “Bruh just get a pizza,” said another.

“That’s cool in all but damn I just hate being sticky doesnt matter where I am,” a third user commented.

This is not the first time that Ms Knipe has attempted to eat something while skydiving. Her Instagram feed is full of videos where she is seen eating a burger, pizza and other food items while skydiving.